Me: “Okay.. so you’re poised over your ex-husband’s sleeping form…”
Gail: Interrupts with choking laughter

We have this thing, where we can’t deal with adult emotions on the things that hurt too much, so we giggle instead. It’s really pretty awful if anyone overhears a good rape joke… in a Target… with their seven-year-old… at 9:45 on a weeknight? Sir, I really think you should be more concerned about your child’s sleep schedule than my quiet discussion with my best friend about her vaginal trauma (he hadn’t actually heard the joking portion).  Fortunately the above was just a phone conversation.

Gail’s answer was that she’d do nothing.

Mine was that I’d be so threatened by his presence that I could kill him.

I think hers was healthier.

Me: “Every time I see this kind of thing on the news, I worry I’m going to see my ex-husband’s picture. How fucked up is that and how broken am I?”
Gail: “Yeah, I could see him doing something like that.”

I have this stuffed bear. It’s in a box in my storage closet.  I kept it out of spite after all of the things he stole from me, literally and figuratively. It’s covered in soot from a fire I can’t bring myself to discuss. I’m not sure why I keep it. I’m too afraid to contact him to send it back. It feels hateful to throw it out. So it’s just there… in a Wal-Mart sack to keep the soot off of things.

I haven’t woken up with my wallet and keys in my pillowcase since I moved to this apartment. I don’t lock the bedroom door and can usually get through the night without getting up to check the patio and front door locks more than once. I rarely sleep with my gun anymore.

I still can’t sleep without my purse and wallet next to me.

I still have nightmares.

They’re not usually violent. Sometimes he’s texting… counting down the minutes until he breaks down the door. Usually, I’m just still with him. I never did it. I never left. My life never turned upside down to right itself in a completely different universe. I’m still fat and alone and hateful. I lie in bed and can’t breathe. Sometimes I wake up crying. I cuddle the dog and promise him I’ll never let anyone hurt him again. I kiss his paws, even though they’re dirty dog feet, because I’m so happy they aren’t caked with blood. I think the dog has nightmares, too. He’s yipping in his sleep right now. 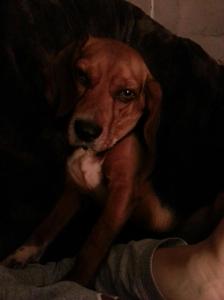 Why am I writing this instead of my final? I suppose I get a nice divorce rant every now and then.

11 thoughts on “I have this stuffed bear…”