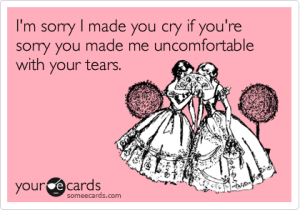 It makes me terribly uncomfortable. Actually, no. Let me revise.

They make me terribly uncomfortable.

Today, Gail got on a plane to head to North Carolina and see her dying great grandmother one last time. This evening I got the following text:

“She died before I got there.”

I immediately called Gail and asked the obvious question “Are you okay?” You see, Gail and I… we really don’t do emotion. I mean, I miscarried, her baby died, we both divorced, then there was the whole rape thing and there were only two or three good crying jags in there. Max. I grew up with mommy dearest, who used emotion as manipulation and my dad and grandmother who are both still incredibly uncomfortable showing any emotion. Gail grew up with passive agressive parents who put on their Beige Faces every time people were around and went on silent treatment bouts when they weren’t. Then from age 15 on, we raised each other. The result is two people who agree that greeting cards are a scam and that when life really sucks, you should just make wildly inappropriate jokes. Seriously. Just send me the money you spent on the card, because I really don’t care what Hallmark has to say about the birthday of potentially thousands of people.

The Sweetest Thing I Said During My Best Friend’s Grieving:

“This sucks for you, not her. She was surrounded by people who loved her and thought it was so sweet that you were on your way. I don’t know if that makes you feel better or not, but I figure you’re not too worried about how heartbroken you are and you’re just thinking about how much everyone else hurts and how you need to be able to fix it.”

The Other Things I Said:

“Don’t deal with the emotions, Gail. She lives in North Carolina. You hardly ever see her anyway. Just pretend she’s still alive and everything’s cool.”

Gail: “The bright side is that I’ll be there for the funeral.”
Me: “That’s a really shitty bright side.”

Gail: “Then my dad told me about how everyone prayed for her and the room was packed full and just minutes later, she died and they all prayed again and you could tell that everyone just felt so relieved, because she was in a better place.”
Me: “Wow. Aren’t you glad you missed that? That sounds awful and incredibly depressing.”
Gail: “What’s depressing is hearing that story and crying in an airport.”
Me: “Yeah, but it would’ve been so much worse if you’d been there. You would’ve been surrounded by people who were closer to her than you were and you would’ve wanted to cry, but you would’ve felt like crap if you did and they didn’t, because who are you to cry?”
Gail: “Ugh. You’re right! But I’m still crying in the airport and it’s embarrassing.”
Me: “Okay. Here’s what you do. Just start screaming irrationally at me about something completely insane” high-pitched hysterical voice “I CAN’T BELIEVE YOU ATE ALL OF THE FISHSTICKS! THOSE WERE MY FISHSTICKS AND YOU ATE EVERY SINGLE ONE OF THEM!!!!’ Just make sure no one can even understand you toward the end.”
Gail: “I said I wanted eggs!”

Gail: “At least I’ll be there to see my grandpa, because now that she’s gone, he won’t be around much longer.
Me: “Ugh. That sucks. That won’t even be sad. That’ll be like a mercy kill, like when you shoot a deer. That’s the wrong thing to say, huh?”

Me: “They don’t have my seasonal coffee creamer any…”
Gail: “Hold on.” begins checking out at the airport store
Me: faux hysterics “Hey! Don’t tell me to hold on. I listened to you cry about your dead grandma and you tell me to hold on during my time of need!”

Luckily, Gail not only expects this from me, but she usually wants it and is upfront about it when she doesn’t. Mostly, she says it gets her mind off of how much things suck.

Me: “I’d make an awesome grief counselor.” choking sob “‘And they raped my five-year-old daughter over and over again and I just keep thinking that it might have been better if she’d just died!'”
Gail: “And then you’d be like ‘Yeah. That’s probably true.”

We talked for  a while and Gail told me about the couple in the airport who met on Craigslist with one of those “I’m just looking for a nice young lady to go on trips with me” ads. I recommended she join them to get more about this story and we joked about how this woman was so going to end up dead. As Gail was about to hang up, I encouraged her to explain to the person seated next to her on the plane that there’s a 1/10 chance they’d be on a plane with either a real or a fake bomb, but not to worry, she’s brought along a fake bomb to sway the odds in their favor. She agreed to, but I’m pretty confident that was an outright lie.

With Gail, I can pretty much express my condolences “I’m sorry. That sucks.” and she responds with “Thank you.” Then we dive right into tasteless jokes about rape and dead babies. With everyone else on the planet, I’m only capable of stating the obvious. When my coworker’s husband died, I mulled over what I should say to her for several days, eventually wondering if I should say anything at all because it had been so long. Then I finally blurted out “I’m sorry you’re sad” which was immediately followed by an internal cringe and a what the fuck?!?!

A few weeks ago, Jay texted me about his father, whom he and Chad both despise.

Jay: My dad has cancer.
Me: Oh, wow. I’m so sorry. What kind?
Jay: Carcanoid syndrome:
Me: Is it serious?
Jay: Had emergency surgery Thursday at midnight
Me: Is he okay? Is he going to be?
Jay: I think so
Me: I’m sorry Jay
I was doing really well until:
Me: My mom once told me she was having heart surgery and I felt horrible because I didn’t like her and she was sick.
Me: Maybe that was the wrong thing to say. I didn’t mean it badly. I know y’all don’t get along, but he’s your dad and you love him and want him to be okay. I’ll pray for y’all.
Jay: I didn’t take it in a bad way. No worries and thanks.

My friends just expect me to say something awful, apparently… and to be fair, my mother made up her heart surgery for attention.

It’s not just grief-based either. I have no idea how to receive affection unless it’s from the cuddly wuddliest wittle beagle ever. Most people who hug me leave me counting the seconds because I don’t want to pull away too quickly and offend, but I also don’t want to veer into weird territory and have them thinking I’m about to smell their hair and lick their earlobe. I just never learned this stuff. When I tell my grandma I love her more than anything, you can see how much she doesn’t know what to say. It actually makes her uncomfortable, because I’ve seen the lady cry four times ever. The best way to get something from my dad is with tears (though, we have an unspoken agreement that I will not abuse this), because handing me some cash is so preferable to handing me some Kleenex. I’m just the most awkward with grief. I can’t say the right thing under normal circumstances, let alone when someone sads all over me. I hope I meet a compassionate man who says the right things and can mend a five-year-old’s broken heart, because I’ve got dibs on Sarcastic Robot Parent.