So, Gail finally came back from North Carolina. We hadn’t hung out in a week, exactly, and I was getting the shakes. She quickly pointed out, however, that that might have been for another reason entirely.

Me: “I found the best blog while you were gone. You should have read this at your dead grandma’s funeral. It would have been a lot better.”
Gail: “Wow. I can tell you haven’t really been sleeping lately.”
Me: “Whatwhy?”
Gail: “Because the less you sleep, the faster you talk.”
Me: “Huh. Iguess I hadn’t reallythought aboutit. I didgoto bed ataround 3:00, 2:30 lastnight?”
Gail: “And got up at, what, 7:00?”
Me: “Um. Yeahactually.”

I’ve since realized that I must just be really stressed over the whole graduate portfolio thing… so much so that I needed Gail to tell me so. That might also be why I haven’t been eating. Is that not the coolest fucking stress reaction ever? I get a Masters degree and I get skinnier?!?!? So it begins… my stress-induced insanity. I’m not exaggerating when I say that the summer of 2011 required I be medicated from a concussion to get any sleep during finals. The spring semester of 2012 ended with me propped up on a bunch of pillows, trying to drown out all distractions as I worked on my final project… from behind the closed shower curtain in my empty bathtub… sucking my thumb and crying. Seriously. If you’re thinking about getting a master’s degree: stop it. The thing is… that was in May. It’s fucking February, y’all. I deliver my portfolio in mid-April and I have already taken up my post in the empty bathtub, where my blog can apparently still distract me. Psh. Whatev. I only care about the ends. Fuck the means. Apparently, Gail and I have funnier conversations when I’m high on exhaustion and we haven’t hung out for a week. We had a late lunch (a side salad for me) and visited the art supply store today.

Gail: referring to demands on her time “They all get a piece of Gail.”
Me: “We’ve known that for years now.”

Me: “Why would you want this one? Is it for when you get really fat and tall?”
Gail: “I like the really sizable ones. Okay, get ready to say ‘We’ve known that for years now.’ I like them sizable.”

Gail: “Why would you hang a picture in your bathroom of a prettier bathroom?”
Me: “Maybe you could get a couple of the mega mirrors and make it look like you are in that bathroom.” 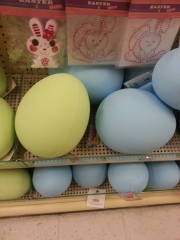 Me: “Oh, my gosh, these look like they should be plush and I just felt a moment of complete rage when I realized they weren’t.”
Gail: “You’re insa… oh, my gosh, they do look plush.”

Me: “Ohmygosh. I have the strongest urge to just go all out and decorate for Easter in glitter testicles.”

Me: “That beef jerky had better be made out of fucking unicorn meat for $10. I doubt you could eat unicorn meat, though. It seems like it would be like polar bear meat and just be toxic to your system, because it’s mythical and you’d die.”
Gail: “Wait. What? You can’t eat polar bear meat? Says who?”
Me: “Everyone. That’s like a thing everyone just knows.”
Gail: “No it isn’t.”
Me: “Yes it is. Just because you don’t know it, doesn’t mean everyone else doesn’t know it.”
I google it, because smartphones are bomb.
Me: making a placating guesture with my hand “Polar bear liver. I’m sorry.”
Gail: incorrectly imitates hand motion “What, is that some kind of ‘nuh-huh!’ gesture?”
Me: “No. That’s ‘calm yourself’. But see. I was right and you’re just stupid. You die if you eat polar bear…” :drop voice to a whisper: “livers.”
.
still scrolling through phone
.
“Polar bears aren’t able to force geese into extinction and science is really upset about it! Or they’re taking note of it. I guess it doesn’t elaborate on their feelings. They should be upset about it. Wait. If polar bears are some kind of natural predators to geese, we need to get us some fucking polar bears up in here!”
Gail: “Oh, my God. Are you listening to yourself? You are insane when you haven’t been sleeping. ‘We need to get some fucking polar bears up in here!'”

I have an intense Once-Cried-at-the-Zoo-at-Age-23 fear of birds, particularly geese. We have too many fucking geese here.

Fuck. I am being super unproductive. Even in the bathtub.