I stand by my dad’s work truck while he ends his phone call before our weekly lunch.
Me: “That didn’t sound fun.”
Dad: “No, it isn’t. Dad’s dyin’ and he’s just pitiful.”
I hug him and he grips just a little tighter than normal.
Me: “Love you, daddy.”
Dad: “Love you too, baby.”
Me: “So it’s bad, huh?”
Dad: “Yeah. Like I said, he’s just pitiful, but he’s been pitiful his whole damn life so it’s just pissin’ me off even more now.”
Me: “Well, I’m sure I’ll be there with mom one day.”

When I was little, my dad had two dads. One was his step-father, my Grandpa Murphy, who died of cancer when I was five. The other, we saw so little that I once introduced him to my cousin (also his granddaughter) when I was six. I can list what I know about my Grandpa Geff in bullets…

My Grandma Kay once told me that Grandpa Geff would regularly promise to take my dad out after the divorce; my dad would sit on the steps waiting for him all evening and he’d never show. After she married my Grandpa Murphy, he stopped offering to help at all and my dad quickly came to think of Grandpa Murphy as his father. Grandma Kay once explained the divorce to me, how Grandpa Geff wouldn’t let her use birth control, but wouldn’t help with the kids and wanted her to take care of him as if he were a child as well. She declared….

“I told mamma and daddy, ‘I’ve been a good girl my whole life and I’ve always done exactly what you wanted, but I will not stay married to that man. I hate him.'”

For the last few years, my dad and I have been celebrating semi-weekly Daddy Lunches. They’re one of the best parts of my generally packed schedule. 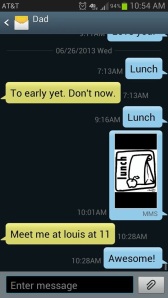 I’m almost certain it’s more of a texting issue than a spelling issue.

For the last several weeks, though, he’s talked to me a lot about his and his sisters’ frustrations with Grandpa Geff’s cancer.

Me: “I’m kind of surprised you’re all doing so much. I mean, I know you don’t have the best relationship.”
Dad: “Well, you know, what can you do? You can’t just leave him to die.”

Me: “I feel bad, because I don’t really feel that bad, you know? I’m sorry.”
Dad: “Don’t apologize, baby. He was never around when you were growin’ up. You hardly know the man.”

Dad: “He keeps callin’ me over in the middle of the night swearin’ he’s gonna die. He’s just eatin’ up the attention.”

Dad: “Sarah keeps tellin’ the nurses not to give him pain medicine and tryin’ to bring her stupid ass preacher in to ‘pray for him.’ Fuckin’ crazy ass bitch. I’m gonna lose it on her. Dad was a devout Catholic his whole life. He is not gonna want some fuckin’ preacher prayin’ over him.”

Dad: “I wouldn’t let my dog live like this. If she couldn’t walk, I’d put her down.”

I don’t want Grandpa Geff to die, but I feel worse for my dad than I do for him. Grandpa Geff’s a religious man who never pursued much in his life. He’s comfortable with death and as long as he’s medicated, his remaining days will be good. I feel so much for my dad right now, though. This is the end. He’s having to face the fact that Grandpa Geff will never come through for him…. while helping him bathe. Grandpa Geff milks the attention and drama, by refusing oxygen and calling every few hours to cry wolf that this is really the end. My dad rushes over, because it may be and then finds it’s just his usual drama. He’s relieved and regretful, feeling guilty about the latter. He doesn’t want to abandon the man, but at the same time, resents him for his own abandonment. On his death bed, he sees him coddle my dad’s forty-something half-sister like he never cared for him or his sisters, even when they were children. He’s hurt and stressed out and resentful, but still battling to carry out his dad’s wishes of using what’s left of his money to pay Sarah’s mortgage. He even fights her off when she demands to bring in her Evangelist preacher and take a sick man off his medicine. They’ve had multiple arguments about the house Grandpa Geff lives in, because ownership goes to Grandma Kay when he dies. She wants her kids to sell it and split the money, because their dad never did anything for them and Sarah is pissed. My dad’s still angry on my Grandpa Geff’s behalf, because Sarah’s taking advantage of him and has been doing so for half of her life. My daddy’s a lot of things… vulgar, loud, funny, offensive, loving, generous on his terms, but he’s not sensitive and watching him hurt… well, that fucking hurts. When he hugs me tighter than usual, says “I love you, baby” and clearly eats up being around his young and lively 25-year-old daughter, if only to discuss his pitiful and selfish dying father… I want to tear up. It’s like watching Chuck Norris weep. 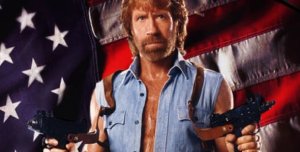 Maybe I feel so much for him, because I will be there with my mom one day. Right now, she’s got a good 30 years to stop being who she is and apologize for what she’s torn away from me. Well, she eats a lot of mayonnaise, so maybe 20 years. When that day comes, though, and I never got another glimpse of the woman who used to put candles in my birthday pancakes? When I know it can never get better? That’s gonna hurt. When she somehow manages to dramatize death… that’s gonna piss me off. I’ll feel relieved that she’s never again going to play head games with me… and I’ll feel like shit because of it. So, I can imagine how my dad feels right now.

Then again, maybe watching my dad watch his dad die just strikes a cord with me, because I couldn’t bear to lose my daddy. Maybe that’s intensified by watching him be so good to a man who did him so wrong, despite his defensive harsh words in regards to the situation. I mean, if there’s a single person on this PLANET who can see past the offensive jokes to the goodness and the pain, it’s the girl to whom he passed the gene, amiright?

I know for certain, though, that watching a man’s family have such conflicted feelings on his death… well, that makes me want to live a good life where I care for people and keep up my end of the bargain so no one’s ever not sure if they’re sad that I’m dying.