Me: I want to buy a motorcycle and shoot my guns from it!
Gail: Turn off Sons of Anarchy.

Me: I just found a Shake and Bake Meth Recipe on Google! All I need are the batteries.
Gail: Ugh. You’re going to blow yourself up. How many episodes have you watched?
Me: Like one. Breaking Bad isn’t really doing it for me.
Gail: Your search history is going to get you on some kind of list.

You know, good friends support each other, GAIL. Just this last week, you were appallingly negative about my attending a simple party.

Gail: “Well, for one, judging by how often you leave your drink unattended, I would say you definitely should not go to a frat party. Two, while I’m sure you could pass for 21, no one’s going to talk to you when you excitedly open with ‘Hi! I’m Belle and I’m 21!'”

Ugh. What am I going to do with you?

Recently, I’ve decided to break up my Gossip Girl marathon with The Sopranos. I had actually planned to watch the latter first, but I couldn’t find it to rent and I’m too cheap to purchase anything I haven’t seen. Because libraries are the coolest, I was able to get it from work, through Interlibrary Loan. After two episodes, Gail, once again, decided to crush my dreams.

Gail: Surely you’re not the first person to think ‘I’m a librarian.That’s practically Al Capone.’
Me: Was Al Capone technically the mob? Hmm… I’ll need to catch up on my trivia.

I can’t wait until you have kids, Gaily. They’ll run in and joyfully share their desire to be an explorer…

“Oh, honey, that’s not practical. Everything’s been discovered already and you’d probably just be bitten by some kind of exotic bug and die. Also, keep the desire to leave the country under wraps. The president can hear you right now.”

So, despite obvious Mean Girl Sabotage, I plead my case for exactly why I would not only make a good mobster, but in fact, a better mobster than Tony Soprano.

I could carry out a vendetta, without getting caught, at a very young age.
When I was in the second grade, I got a cool new kind of glue, with a sponge applicator. Everyone thought it was the neatest… until it went missing. A few days later, as I was walking by Sammy’s desk, I noticed a suspiciously similar brand of glue. Of course, I promptly declared that she stole it and told the teacher. Ultimately, Sammy confessed, Mrs. Green  made her apologize and return the glue, and likely issued a reasonable punishment… as I seethed. An apology and some missed recess, when the little bitch wronged me?!?!?

Naturally, in a lawless society, I took matters into my own hands and meted out justice like Batman. I waited two weeks, to throw off suspicion, and graffiti’d the bathroom stall with Sammy’s name during recess… first and last, so no one would be mistaken. Mrs. Green was livid and all Sammy’s friends thought she was lying when she said she didn’t do it. Not only did she have to scrub the wall clean, but she missed a lot more recess, as well. I actually managed to earn her a greater punishment, and also completely discredit her as a person, exactly as the little thief deserved.

Lord help me when I have children, because that was just plain awful.

I can cuss better.
No, really. Isn’t the seventh “fuck”, in a sentence, a little superfluous, Tony? I mean, there are a lot of things I could suffer from while being held at gunpoint: rape, robbery, blackmail, torture. Do we really need to add redundancy to the list? I’m not offended by your usage of the word “fuck”, but it’s a little tired, what with the 13-year-old in the corner using it. The key to swearing with impact is to mix it up a little. Not everything has to be HBO-worthy. “Mountain of dicks” is totally prime time appropriate and still gets the point across. It doesn’t even have to be that adult. You throw in a “zetus lapetus” or an “oh em jingles” and those f-bombs really pop. 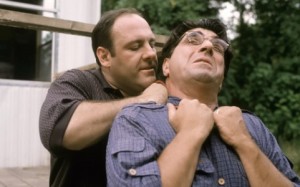 “I’m gonna drape your intestines over the trees like Christmas garland!” See. I win.

I know where feelings belong.
Say it with me now: “With the last fucking Horcrux.” Now, I’m not too far into this show, but I feel it’s in poor judgement for Tony to see a therapist. So some ducks flew away? Bee eff dee. You don’t talk about your feelings. This is an HBO crime drama, not a sitcom about a recently widowed father raising his three young girls. Get your fucking genre right, dude. I mean, were I a therapist treating the mob boss of Jersey, I’d shut my cakehole and all, sure. The thing is, all it takes is one time for this chick to talk. Yeah, you’ll cut off her arm and rape her with it, or whatever mob bosses do, but the FBI will still have proof that you’re the guy laundering money, selling coke, moving stolen DVD players, and cutting off people’s arms and raping them with them. The therapist will be dead. It will have hurt. It will still be all Tony’s fault for being such a vagina. Need to vent, but find you’re a crime lord? DON’T. That’s part of the fucking gig. Just hide in fiction until the problems go away. 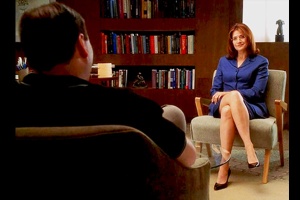 Overall, I would be a lot more discreet.
Okay, seriously dude, I know you’re like a household name in this world, but maybe, just maybe, you wouldn’t be if you didn’t wear that mobster costume every day. You’re a chubby Italian man with a thick accent, obvious anger problems, and an income level that’s completely incongruent with your claimed profession? Wow. Your Etsy store must be doing great! I, however, have pink guns, denim dresses, pearls I actually wear, and country music blaring from my car. The only indicator I might give of my mob involvement, would be that I’m Catholic. Granted, this is a bit more brow-raising in the Midwest than it is in Jersey, but I assure you, the flowered dress, peep-toes, and usage of the word “y’all” will more than conceal my secret station and crime ring.