That pretty much sums up my dating attitude over the last few months: lots of hyperbole from me and put-upon sighs from Gail. I haven’t actually been trying since the disaster that was Assistant Manager giggling over my breakfast pastry Savior, though. I’ve mostly been enjoying the single life, that is drinking entire pots of coffee by myself, staying up all night to create dance routines with the dog, and having Once Upon a Time marathons for days on end.

Once the shock that was another solo birthday had passed, I felt a lot less pressure to fall in love right now, right now, right now. Again, I vowed that, if I reached a point in my life where I felt like my chance for family was slipping away, I’d just have children on my own. After all, why would I pass up one of life’s great joys just because some stupid boy couldn’t follow a schedule? So, I was enjoying my time alone. I was absolutely not in Panic Dating Mode when Corrections Officer came along.

“When my Gran tells me to run, I run.” – Sookie Stackhouse

Sigh. The one time Sookie Stackhouse had something useful to say.

Corrections Officer was an OKCupid user with a blank profile. He’d messaged me once before and I’d ignored him, because he was military and that’s all his profile really said. Then, he messaged again, about a month later, clarifying that he wasn’t in the service any longer and that he worked for the government. Men are usually terrible at choosing photos and his weren’t half bad, so I messaged back and asked him to tell me a little about himself. For the next couple of weeks, he’d text me briefly each day, letting me know he was interested, but not sitting outside my apartment with his hands down his pants. It was a nice balance, because clinginess freaks me out like Chandler Bing.

While no longer a true military man, Corrections Officer was still in the Reserves, so the first weekend we chatted, he had to go out of town, or we would have met then. Instead, we talked for an additional week, with the intention to meet last Saturday. I texted a day before to tell him that I thought we should probably make some more specific plans, so we decided on 7:00 and he asked what I liked to eat. Not wanting to be pushy, I again waited until about 1:00 on Saturday to ask exactly what he wanted to do. After a touch of “What do you want to do?/I really don’t care” – Dude, just let your testicles drop and make a fucking plan – he said to meet him downtown at the outdoor store and that we’d walk to a popular restaurant from there. The last time I heard from him was around 4:30, when I was still at the library. 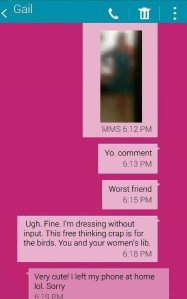 I was excited, y’all… like legitimately reminding myself that we might not hit it off, excited. I even told all of my coworkers that I had a date. Despite the fact that Saturdays at the library are rough, I rushed home, redid my makeup, put on one of my many, many, Zooey Deschanel costumes (pretty much all I own), straightened my hair, and headed out. I arrived at the outdoor store five minutes ahead of time, stowed my purse in the trunk, and found a visible bench to sit on out front and waited…

So, I’m not sure what happened, but without a response, I think I’m gonna head home.

Just to be certain, I tried calling Corrections Officer and got voicemail, doing a quick walk through inside, just to make sure he wasn’t browsing boats with his phone on silent. After trying to call a couple more times, I headed to my car, just ready to go home and plot my blog post over this horrendous event. Then my phone rang.

Y’all, I have a predate prayer. It goes a little something like this:

Jesus, please let this go well. Let this be someone worth my time and maybe even someone I could fall in love with… I mean, ‘with whom I could fall in love.’ I’m sorry ’bout that. If that’s not possible, could you please just let it not be awful? I’m so tired of terrible date stories. Finally, if it is awful, could you please give me the strength to conduct myself with grace and poise, no matter how horrifying things are? Thank you.

The above prayer is exactly why I’m proud of the way I responded when I heard Correction Officer’s cartoon redneck voice for the first time. I’m not even being petty. My daddy has spoken the words “That bobcat come flyin’ out from underneath” and I thought this guy’s accent was over the top.

I get that things happen, folks. I do. But this guy could not have been less apologetic about the fact that I’d been waiting downtown (which is about 20 miles away), all dressed up, for over 30 minutes. I’m not even accusing him of lying. However, he’d texted me at 4:30. I know he isn’t allowed a phone inside the prison, but he absolutely had access to one before he entered. I deserved, at the very least, an “I just got called into work. I don’t know when I’ll be out and I won’t have a phone. Let’s postpone until 8:00.” Instead, he left me to feel more and more dejected by the minute, waiting for some kind of call. When he did call, I didn’t even get an apology… except as an afterthought. 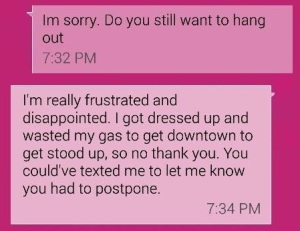 I am really not a dramatic person, folks. I make wildly exaggerative declarations, as a joke, all the time; but short of insisting that eating the candy on the break room table was the worst thing that’s every happened to me, I’m pretty low-maintenance… until I crack. I’m not gonna lie, either. The poise totally ended with that text.

Me: “I’m gonna die alone!”
Gramma: “What happened?!”
Me: “I just got stood up! Now I’m gonna go home and eat cotton candy jelly beans for dinner and suck my thumb and start the process of dying alone!”
Gramma: “Well, who was it?”
Me: “The corrections officer that you said was mean, because he was a corrections officer, and you were right! It’s never gonna happen! I’m never gonna meet anyone and I can’t even be a cat lady, because the apartments won’t even let me have a cat! I’m never going to be able to have babies!”

Gramma: “Well, if he’s not more considerate than that, Belle, it’s for the best that you didn’t waste your time on him.”
Me: “I’m not crying over one stupid boy I’ve never even met, Gramma! I’m crying because they’re all stupid boys and I’m not gonna be able to have children!”
Gramma: “Oh, stop it. You are, too. When you least expect it…”
Me: “Oh, Gramma, I can promise you that sitting alone in front of an outdoor supply store, slowly realizing that you’ve been stood up, is exactly when you least expect it.”

The conversation didn’t exactly improve from there. It was pretty much just a lot of me exclaiming that there was no one left and my ovaries were rotting, with my Gramma offering to call Corrections Officer up and “give him a piece of [her] mind!” Eventually, I let her go, took off my makeup and set the dress aside for church in the morning. I curled up on the couch and ate my Jelly Belly dinner…

I took out a cheesy romance novel…

… and I cuddled the dog and told him all about how he was the only boy I’d ever need.

Me: “I’m so tired of awful dates.”
Gail: “Yeah… this one was exceptionally bad.”

8 thoughts on “Pretend Poise: The Time I Got Stood Up”