Last week, I had my first ever fourth date with Fluid Engineer, who will now be known as Jake Granger. That’s right, folks. He gets a name.

I didn’t report on date four, not because it didn’t go wonderfully, but because I was in the middle of an internal battle against my tendencies toward self-sabotage.

Date four was great. I had the idea to go to the science museum, not thinking about the fact that it’s summer and it’s far more directed at children this time of year. When I realized my mistake, I felt awful, because Jake had spent $30 for the two of us to get in and it was my idea. I apologized a couple of times, but he genuinely didn’t seem to mind. We enjoyed the exhibits as best we could, as adults, laughing at the earthquake generator that’s been in place since I was a little kid. It felt like standing on top of a Mack Truck engine and I cackled like a mad woman about how it was exactly like an earthquake. We had time to see a planetarium show and Jake made up for my numerous faux pas with one of his own.

I did not handle my amusement with grace. To be fair, Catholics in the south are few and far between, unless you’re near Mexico.

After the science museum, Jake clearly wanted to continue spending time together, because he suggested a movie and dinner. There are a lot of experiences that tell you a great deal about someone’s character, such as an accidental trip to a pricey children’s center, but I think one of the most telling is how someone reacts to a bad movie. If you’ve read this blog for any length of time, you know I get genuine joy out of mockery. I mock things I like, so when we saw Self/Less, I got a pretty fair glimpse into Jake’s sense of humor, as he laughed right along with me at the nonsensical plot. We hadn’t kissed yet, but when I started to shiver, he put his arm around me and I pulled away to lift the armrest between our seats and make things less awkward. It was nice, without going too far. I know, I know. It was the fourth date, but I’ve kissed like two people ever.

Dana: “You haven’t kissed him yet? You’re gonna lose him.”
::one week later::
Dana: “So how’s your beau?”
Me: “Oh, I’m not telling you anything else about him.”
Dan: “What?!? Why not?”
Me: “Because you told me he was going to lose interest, unless I put out.”
Dana: “No, I didn’t.”
Me: “Come on. That was hardly even an exaggeration. That was practically verbatim.”

We ended the date, still with no kiss, but we talked in his truck and in front of my apartment door for ages. He never hinted at wanting to be invited in and we just continued to enjoy each other’s company. I had a great time.

Y’all, I don’t even know what was going through my head, but two days later, I was looking for every reason to blow this guy off. I’ve never been on a fourth date and Jake still hadn’t kissed me, so maybe I was worried that we were moving along too far without discovering whether or not we had any chemistry. Maybe I felt self-conscious, because I didn’t understand what I was doing wrong. I internalized my frustrations with myself (because no matter how I tried, I still couldn’t find anything wrong with Jake) and checked out a couple of really harsh dating books about how I’m going to die alone, because I’m a bitch. I even tried to tell myself that I was really 33 and had traveled back in time for a second chance with this great guy. Finally, I had some time with Gaily, who I can’t seem to avoid telling everything.

Me: “I don’t know what the fuck is wrong with me. It’s not that I’m convinced that this is the last guy on the planet that could be compatible with me, but there’s just nothing wrong with him and I still want to sabotage things, because I’m a stupid cunt! He opens doors for me, pays for everything, laughs at my jokes; I liked being with him and enjoyed having his arm around me and I’m going to be eaten by house cats!”

Aside from just verbalizing all of the wonderful qualities Jake had, I also asked Gail if she’d ever had the inclination to bolt in her early days with Terry.

Gail: “Well, you know that I’m a first date kisser…”
Me: “So they say, you whore.”
Gail: “Well, we were on our third date and Terry still hadn’t kissed me. It was starting to make me really self-conscious. I got to the point where I felt like I was done if he didn’t kiss me soon. I think that was the only problem, though.“

After talking things through, I felt a lot better about the whole thing and was thrilled that I had continued responding to Jake’s texts and made plans with him for Wednesday night: date five. We were going to dinner and to see Ant-Man. Once again, I was excited to see how things went. The moment of truth rolled around and…

I can’t figure it out. I don’t know what was wrong with me, because I really like this guy. He’s funny, intelligent, and quietly chivalrous. He humors my weird exaggerative rants and my Family Guy-esque breakaway side stories. He seems to really enjoy being around me and find me attractive and he’s really pretty cute. He took the wrong turn four times and never showed any truly scary road rage. At the movie, he raised the armrest himself, much earlier in the show, and we sat with his arm around me through the majority of it. He didn’t even mock me when I buried my face in his chest and covered my ears, because I knew the lamb wasn’t gonna make it. It was just comfortable and I can honestly say that a lot of that getting-to-know-you awkwardness has faded. All we had left was the kiss.

Jake drove me home, we talked in his truck for awhile, and once again, we stood by my door and talked for ages. He never asked to come in and we even commented on how bad we are at ending things at a decent hour, but how that’s a good sign. Jake had his arm against the door by my head and I was sure he would kiss me… when I started to get really, really dizzy.

I gave blood the other day. It’s been really hot in the South this week. I had deliberately been trying to drink less liquid that day, because it’s embarrassing to pee 13 times on a date. You know what else is embarrassing?

… and I woke up on the concrete to Jake asking if I was okay and telling me he was going to call 911.

Oh, yeah. I made a date rape joke. 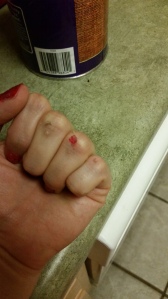 Jake helped me up and watched to make sure I got up the stairs safely. I calmly and rationally got a glass of water and texted Gail. 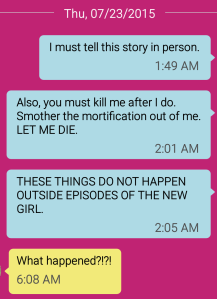 I’m pretty sure Jake took the date rape joke more seriously than I intended. Who’d have thought, right? I’m certain he’d have come up with me to make sure I was alright, had he ever been in my apartment. He did offer, but I was too embarrassed to accept. Apparently I scared him pretty badly, but I don’t think he wanted to risk it appearing as if he were taking advantage of the situation, based on his morning text to see if I was okay.

On the bright side, it appears he still wants to see me, so my awkwardness at least brings this boy to yard.

I need to be crystal clear, here. At no point did I actually fear that Jake had drugged me. For one, while I wouldn’t trust the man with my PIN just yet, I do pretty much trust him not to rape me, or I wouldn’t be letting him drive me places. Two, it had been hours since I’d eaten or had anything to drink and at no point was Jake alone with any of it. Three, I’m no Olivia Benson, but I’m pretty sure that men who do drug women don’t wake them fully clothed on their front porch by gently patting their cheek and insisting they’re going to call 911. Finally, that’s not how date rape drugs work, because I felt completely fine five minutes later (aside from the head trauma). No. Jake is not a sexual predator. These things just happen to me. I am just a dork… with a mild concussion, busted knuckles, a bruised shoulder, and still no kiss.

Gramma: “Maybe you can just tell him you swooned.”