At 24 years old, I sat in a Sonic drive-through with Gail.

Now, perhaps, if I’d actually had a tattoo in mind, this wouldn’t have been such an inevitably regrettable decision. I am not anti-tattoo. My first was not my last. I also have my Gramma’s signature of her first name, which is my middle name and hopefully one day my daughter’s middle name, on my left foot. I will genuinely cherish that tattoo for all time, particularly when she’s gone, though she still insists that she’ll live forever. At 24, though, I had just divorced my ex-husband, lost 90 pounds, was dating again, nearing graduation for my master’s degree, and felt like I’d gotten my whole life back. I wanted to commemorate that, so when put on the spot, I chose something that spoke of life to me. The fact that it was a Logan’s Run reference was just an added bonus.

Today, I look at this tattoo and you know what I see? I see a girl who needed to start her life over and all the reasons why. I see a 260 pound 22-year-old fantasizing that her psychotic husband will kill himself. I see two part-time jobs substitute teaching and cleaning gym equipment with a bachelor’s degree. I see myself driving around with all of my valuables in my trunk, because the man I live with will pawn them. I see a 24-year-old who desperately wants to distance herself from the most terrifying years of her life, by getting a tattoo that symbolizes their end.

You know what, though? I did get my whole life back. I got to be young and reasonably fit. I got to go to bars with my friends and giggle through bad date stories. I finished my master’s degree and built a career. I fell in love. I’m going to get married and have babies and buy a home and it’s just going to be… my life. I don’t need a reminder that I ever had another one. I’d love to say that I came to this conclusion, gradually, over the last four years, and in a way, I did. However, I also went home from the tattoo parlor, looked at my cliché white girl ankh, and Googled how much it would cost to remove it. Maybe a part of me knew, even then, that this symbol wouldn’t be relevant for the rest of my life. Knowing removal would be costly and painful, of course, I tried to rationalize. This was my Gail tattoo. This was something crazy and impulsive we did together. Had I just gotten something silly and fun, like an elephant or a flower, then sure, it would be. But, as Jake and I have become more serious, I can’t deny that this is a reminder of a time in my life that it hurts to remember. Those years still cause me nightmares and I think about them every time I look at this tattoo. I just… don’t want it anymore. I also know that, when it comes to removal, it’s now or never. If I still have this tattoo when I get married or especially when I have kids, it’s not going to be a financial priority. So, a couple of months ago, I bit the bullet and scheduled my first consultation.

Speaking of time and finances, do you have any idea how long it takes to get a tattoo removed or how much it costs? Perhaps I shouldn’t have built my expectations for this procedure on a season of How I Met Your Mother, but I felt like it was a two to three month process, of 10 sessions. No. In fact, there must be eight weeks between each laser removal session and patients are advised to expect 10 sessions. So, in a year and a half, I can hope to see a mostly clear-skinned foot. That’s right. Results cannot be guaranteed, so the decision must be made to pay the price and hope for the best. That price, at the only clinic in the city, is $35 per square inch, with a $50 minimum. Because my tattoo is thankfully small, that makes it $50 per session. I’m no mathematician, but even I can figure that it’s going to cost more than $500 to  get this tiny little ankh off my foot. So, how much does it hurt? 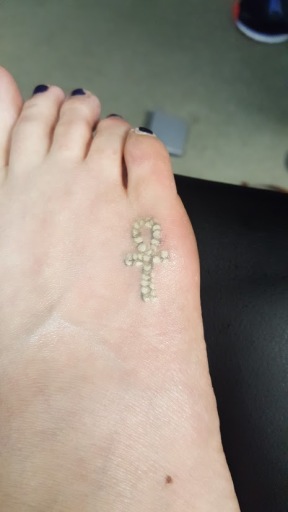 The first picture is of the scorch marks from the laser. The second is of the blistering that happened later. I did a little bit of research online, about how much the procedure hurts, trying to get an idea of whether or not it would even be bearable, before investing money. The comparisons ranged from “popping like a rubber band” to “small droplets of hot grease hitting your skin.” In my personal experience, the latter was dead on. Fortunately, I have a great technician, who will stop and let me take a break. The first session took me three goes, the second only two.

Does it hurt more than getting the tattoo? Yes, but it’s a much quicker process. Because my tattoo was so small, it would’ve taken, literally, about 30 seconds to do the whole thing, had I not needed breaks. Getting the tattoo took about five minutes and was also quite painful. Personally, I’d rather the extreme pain of removal for 30 seconds than the substantial pain of application for 10 times that. That being said, were this tattoo any bigger, I’m not sure I’d bother, partly for the price and partly for the pain.

As it stands, now, I’ve been through two tattoo removal sessions and I deem it bearable… but only just. I’m cheap, though, so even if it did get more painful, I’d be completing the process, because I’ve already invested $100. Fortunately, it’s supposed to get less painful, but pretty much always be awful. I keep having nightmares that I have larger and uglier tattoos to remove. Will this one be worth the time, pain, and expense? For me, yes. My advice overall, is simply not to accompany a divorce with at tattoo.