Ugh. Maybe he’ll be an asshole so I can leave sooner. I hope I’m the first one there. I hate that moment looking around for the other person. I’m pretty sure I look like a meerkat every time. 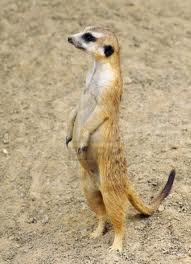 Maybe I’d have more options if I’d stop mentally correcting everyone’s grammar when I’m looking at profiles. Who knows? Last night’s date wasn’t bad. It wasn’t good either. If I had to be unkind, I’d call Extruder Technician “a little blue collar.” He’d likely call me a little pretentious, though. He was a nice guy, who worked forty hours a week, and his profile stated that he was working on a bachelor’s in business and finance. I don’t usually date undergraduates, but he’d spent five years in the Marines, so the delay in his education and career planning was more understandable. Extruder Technician clarified that he was in his first year of community college and hoped to eventually transfer to a four year university. When I asked what he planned to do with the degree, he said..

Then, he mentioned how his goal is to move up into management, at his current job, in four or five years.

This is neither the administration nor the economy in which to start “building guns… maybe.” Also, dude, you’re 28. You’ve been out of the Marines for five years. How do you not have this figured out yet? This reaffirmed the “no students” rule. It relates closely to my “no fixer uppers” rule. I don’t want a work in progress. I want the end result. I want the guy who already did that and has his shit sorted. If he’s also working on a graduate degree or a supplementary skill, I’m cool with that, but the career has to be firmly set.

I wasn’t unkind to Extruder Technician. We, in fact, had a nice conversation. He was passionate about making insulation and seemed happy with his life. I, however, am passionate about my career doing something entirely different. It’s not that I’m being a snob… okay, fine… it’s not just that I’m being a snob. I was a 23-year-old divorcée . I come from divorced parents, who also come from divorced parents. My home state regularly ranks number one in divorce for statistics that don’t include Nevada, which, fun fact: most don’t. I have enough against me! It is a statistical fact that education plays a major part in divorce, including educational gap between partners. The other day, I opened my freezer and my first thought was…

Did I put the sherbet there? Has someone been in my apartment?!?!

For realz, yo. My first divorce fucked me up enough. No thank you.

A person can be quite intelligent without a formal education. Gail doesn’t have a degree and she’s one of the smartest people I know. She wouldn’t have found intellectual stimulation in Extruder Technician either. His half an associate’s degree and expressed distaste for learning is light years away from my Master’s in Library and Information Studies, but also from Gaily’s audio books on finance. He was perfectly nice and so was I. I just didn’t connect with him and when I told him it was nice to meet him and thanked him for my frozen yogurt, neither of us mentioned ever seeing each other again. He didn’t text me. I don’t have his number anymore. However… I also didn’t mark his number as spam. Points for me. It was a nice enough date that went nowhere. That, in itself, was quite nice. I’m getting better at this and learning about myself and what I need in a partner.

On that note, I treat you to a list of my worst excuses for no longer speaking to men. Don’t misunderstand. There was always some deeper issue. These statements, though, always got raised eyebrows of disbelief from Gaily, before I clarified the real reason.

Two: The man actually spoke the sentence “There is no way your divorce was worse than mine.” Who the hell even wants to compare those?!?! I don’t owe you any damned justification for my divorce. I just fucking met you. Go suck a bag of dicks!

“He had furry hands! It was like he was wearing his September mittens!”
One: All I could think about was having those plush claws on my breasts. I know that’s weird, but I kept imagining what it would feel like to be felt up by my older brother’s Teddy Ruxpin doll.

Two: The guy had very liberal beliefs, countering my personal conservative ones in regards to my profession. It wasn’t just that we disagreed on gun control (though that would’ve been a deal breaker), but he told me that parents shouldn’t be allowed to control what their children read if their reasons are stupid. For example, if a parent feels Harry Potter is “of the devil” (a common and genuine statement in the Midwest), they shouldn’t be allowed to keep their child from reading it. Who decides what reasons are valid? Him? They’re the parents. It is their call. No. Just no.

“He keeps texting me.”
One: He was an air traffic controller. He worked for an hour and would have an hour off. He texted me every other hour. No one should ever text that much unless they have a vagina, coupled with a chemical embalance.

Two: He swore constantly. I just used the phrase “go suck a bag of dicks” and this guy’s potty mouth offended me. That is impressive. When I told him I wanted to buy a Schwinn, he told my I was an idiot if I spent less than $2,000 on a bike. He told a story of a time he ran over a cat and killed it and was pissed because he thought it messed up his wheel. Dude, I like domesticated fuzzy, cute shit, and the correct response to accidentally killing it is uncontrollable tears! We met at a bar and grill and accidentally stayed for 20 minutes past closing time. He did not tip. He then tried to tell me why God isn’t real. I told him I was going to Mass the next day and he responded with his speech about why God isn’t real.

“He loved the movie Christmas Vacation.”
One: I was talking to the guy on Plenty of Fish. We never actually met in person. 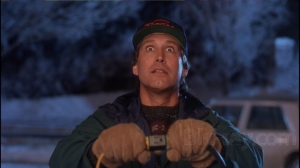 He’s financially irresponsible and it’s funny! Get it!?!?!

Two: He was clearly using this as a tester movie. It’s like when I tell a guy I like Seth Rogen. If he disagrees, then he’d better have money. Kidding. He loved this movie enough to bring it up in June, though. I figured, since I do not get the appeal of Christmas Vacation (or the other stupid movies he named), it was a sign of our intensely differing senses of humor… that and he didn’t like Seth Rogen!

“His grammar is too good and he called me ‘enchanting.’ I’m not even enchanting. I’m kind of a bitch.”
One: In addition to “enchanting”, he used the word “thus” in a casual e-mail, in poor context. He. Used. The. Word. THUS. BADLY. Also… who says “enchanting”?!?!

Two: He was the spitting image of Gollum and there was no connection. He was perfectly nice, but that communication was standard, because he was just so socially awkward and dull.

– My dog is the only boy I like and his longevity does not compare to mine. Commence the dying alone. –

I posted that on Facebook. Bo recommended a parrot, because they live longer. I’m terrified of birds. Perhaps an exotic turtle.

I look this shit up.
http://www.huffingtonpost.com/christine-whelan/pew-research-marraige-gap_b_758272.html