So last week, I had a pretty terrifying online dating experience… or at least I was pretty sure it qualified as one, when I wrote The Time I Almost Got Shankraped by Online Dating. Bee tea double ewe, the day someone slips “shankraped” into casual conversation or a presidential speech, you heard it here first, so you’re welcome.

As my original post indicated, I immediately called Gaily and told her everything. As is her way, she flipped the fuck out and started talking about protection orders and staying at her house for a little while.

I figured it was all good, though. I mean, surely he didn’t think I was interested after all of that awkwardness, right? Then I got a message on Plenty of Fish, after I deleted my OKCupid account. 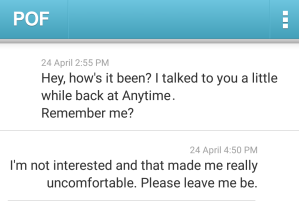 “A little while back”?!?! Dude, this was two fucking days later!

Okay. So he didn’t understand it the first time. There’s no way he could’ve missed the point after that message. Until he did. Unfortunately, I don’t have that screenshot, because I was so freaked out that I immediately blocked him and the message was erased. It went a little something like this, though:

Stabby McStabberson: “Hey, I can’t read your message for some reason. Just text me and maybe we can get to know each other a little better.”

Shetland’s not Mayberry, y’all, but it’s not exactly Chicago either. I could see this guy anywhere, but most especially at my gym. So, I was literally shaking with fear… hence the typos when I responded. 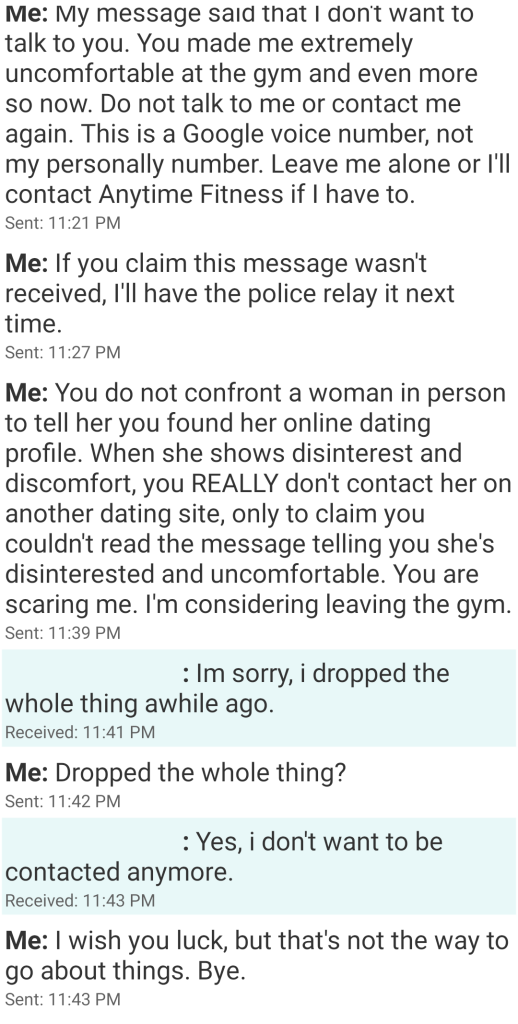 He “dropped the whole thing awhile ago.” I mean, sure I’d gotten that message, literally 20 minutes earlier, but that was “awhile ago.” I am soooo sorry, Stabby McStabberson, for making you uncomfortable. I’m aware that my response was aggressive and downright mean, but I was terrified and I wanted a response to clarify that he understood. I was way beyond letting him save face, at this point. Perhaps he was less crazy and just not that bright, but it’s also not like a dimwitted man can’t still skin me and wear me.

8 thoughts on “The Time I Wasn’t Overreacting: Update on Stabby McStabberson”

Leave a Reply to Belle of the Library Cancel reply