I don’t call myself a feminist. I don’t call myself anything. I just don’t think that respecting other people’s decisions and hoping for the same needs a title, especially not one with such vastly different definitions… most notably, it seems, ones that completely contradict this statement. Gaily, now… Gaily loves the word “feminist.” Gaily has a tramp stamp of the word feminist. The semester she took a women’s study course, I wanted to push her out of her ’97 Bonneville… but that’s because she was insufferable, not because she was wrong. See, Gail! I SAY NICE THINGS!

Gail sees feminism as an expression of female empowerment to truly do whatever we want in life… only with a lot more words, citations, and angry ranting.

As much as I provoke her, though, we do generally agree on this topic. I’m down with her definition and the many people who share it. I am not, however, down with the ACLU’s definition that I can’t have a dissenting political opinion without discriminating against women.* I’m not down with Wendy Luhabe’s claim that it’s empowering to stay-at-home moms to suggest their contribution is worth exactly 10% of their husband’s earnings and every family needs to follow the same financial model.* I’m not down with the gals who think LEGO is anti-women for creating gender specific toys*. I’m not down with a lot of “empowering” statements made in the name of misguided, so-called feminists. For instance:

Educating women on keeping themselves safe is not vicitim blaming.

If you keep up with current events at all, I’m sure you’ve read about the nail polish that was created to prevent date rape. Pretty simply, the polish will change color when it meets a laced drink, warning the wearer not to sip. That’s great, right?!? No. Apparently, not. According to some, this effort is completely misguided. In fact, one activist responds to this development by stating that “we need to think critically about why we keep placing the responsibility for preventing sexual assault on young women.”* Waaaait, a minute. Did you just tell me that it’s anti-woman to protect myself? We prepare men to defend themselves all the time, usually starting with some kind of exotic personal combat lessons at age 4. Teaching a man how to ward off a bully or a mugger is commonplace, but women? Noooo. We should use passive, ladylike if you will, methods to teach people not to attack, instead of taking our fate and safety into our own hands. Women have been taken advantage of, as the generally physically weaker sex, since the beginning of time. FINALLY, someone has stumbled upon the brilliant idea to ask that bad guys just not be bad anymore.

Victim blaming is a disgusting tactic. Telling your teenage daughter that she shouldn’t have been alone in that boy’s dorm room, as she sits on the exam table crying, is horrible and you should have your mommy card revoked. There, however, is nothing wrong with a freshman orientation that warns young women about being in dorm rooms alone with strange men. Encouraging women to take self-defense classes, carry pepper spray, use a gun, wear detective nail polish, is no different than teaching a man to prepare and protect himself. You are not moving us forward or building us up by fighting these things. You are weakening us, by teaching us to put the responsibility for our safety on others, male or female. Yes, it is important to teach young men that no means no, but why can’t this be done alongside a discussion about watching your drink and not walking home alone? Can we not both empower men and women? Did I wake up in 1954 where only the boys get to take karate lessons? Are you fucking kidding me?!?!

It is not empowering to tell me that my vagina makes me easily susceptible to brainwashing.

Recently Mayim Bialik posted an article about why she hated Disney’s Frozen.* To sum things up, she felt it wasn’t as feminist as people claimed, because there was a love story and that it was even guilty of man-bashing, because the villain is male.* This is hardly the first anyone’s ever heard of the irrevocable harm of Disney Princess movies. It seems every mommy blog has an opinion on the subject. That’s not all, though. Little girls are also in danger from Barbie, LEGO, and shirts from The Children’s place. Psychology Today even published an article about the damaging effects of the Twilight Saga. As a society, Americans are just petrified of the influence our female children are getting from the entertainment industry.

Hold on, just one second… 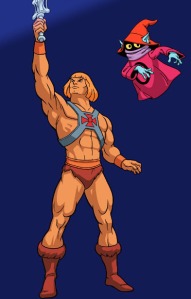 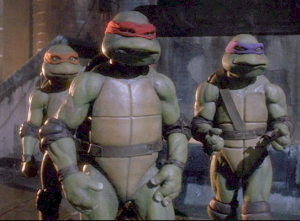 There. I’d like to introduce you to the men of my childhood. Up top, there’s He-Man. Next, Lion-O. Then, of course, Michelangelo, Raphael, and Donatello (not pictured: Leonardo). Finally, Goliath. Did you, perchance, notice any commonalities here? Yes, yes, indeed, I think there might be one. What could it be…? Oh, there it is! Even the gargoyle looks like he’s got roid rage! Do we care? Are there any Time magazine articles on the dangers of 80’s cartoons on male body image? No. I’d love to say that the reason is because we’ve found other, more admirable traits, in these characters. They’re heroes, y’all! Who cares what they look like, when they inspire our boys to want to save the world?!?! But the same can be said for Barbie’s career success, Cinderella’s work ethic, Bella Swan’s literary fascination. So… what’s the difference? Why, we’re women, of course. Our fragile pink brain matter is just so susceptible to the negative influences of toys, that we need a national boycott against LEGO.

Let’s not stop with toys and movies, though. Nope. According to the National Organization for Women, “persistent stereotypes that steer women and men toward different education, training and career paths” are a true threat to our livelihood in general. They’re actually the entire reason I make less money than a petroleum engineer! I haven’t favored care giving careers my entire life, such as when I wanted to be a nurse, a teacher, and finally a librarian, because of my choices and individual personality. It’s because I’m weak-minded and was busy doing my nails, reading Teen Beat magazine, and desperately trying to work up the courage to ask Danny to the Sadie Hawkins Dance. Gail didn’t choose not to go to college, because she didn’t want loans with no clear career path. It’s because she was never told that she could be a paleontologist or a computer engineer. 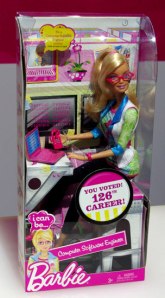 Even when presented with the statistical facts that the wage gap is closer to 5 cents on the dollar than their reported 21, NOW is there to remind me that I’m not really in control of my own destiny, because I’m a woman. Wow. I feel so empowered. Maybe, Barbie is just a doll. Maybe, Repunzel is just a story. Maybe, some women want to be stay-at-home moms, or nurses, or dare I say… librarians. Maybe, if your daughter is getting the wrong ideas from Disney movies, Barbies, and our society as a whole, you just need to spend more time with your daughter.

My political opinions are not anti-woman, just because you disagree.

You can disagree with my libertarian, pro-life stance. We can even still be friends. We all have different values and opinions and that’s fine. That goes both ways, though. You cannot insist that, because I don’t think the government should regulate healthcare, I want to hold women back by refusing to pay for their birth control and abortions. If you’d ask before making these assumptions, you’d realize that I’m just as against paying for teeth cleanings, back surgeries, and biopsies for anyone. You cannot tell me that, because I acknowledge that science considers a fetus a completely unique life form, I am anti-woman. My pro-life stance is entirely scientific, not religious, and I resent the implication that I can’t form an opinion without a priest telling me what to believe. I have not quoted scripture on this issue and I will not. My argument is secular. Your disagreement does not equal my sexism or religious intolerance.

Similarly, according to the American Civil Liberties Union, if I believe that a private business, which does not receive any taxpayer dollars, does have the right to discriminate for non-life saving services (baking a cake, printing a t-shirt, hosting a ceremony), it’s because of my church attendance.* It couldn’t possibly be that I don’t think the federal government should be micromanaging private business. There’s no way I’ve considered all angles, like the fact that a car dealership could refuse my service because I’m a woman. Except… I have. Nowhere in the constitution was I granted the right to a car. It’s not there. Nor was I granted acceptance into an all male university or service in a restaurant where someone thinks my dress is too short. If a business employs completely despicable tactics, such as these, I simply do not feel that the U.S. government has the right to play recess monitor.

It’s alright if you disagree with me on these issues. I’m not looking for a political debate. Your insistence that I have, once again, been brainwashed by men or faith… that I have no right to my own opinion without joining some kind of war on women, though, is offensive. No matter how vehemently you disagree, you cannot decide what my motivations are or insist that I just haven’t thought these issues through. I am a strong and intelligent person and refusing to acknowledge that and my right to my own mind is not empowering.

In short, I am not opposed to the word “feminist.” I am simply opposed to anyone who tries to “empower” women by telling them how to live and think, while calling it feminism. It is not empowering to tell women to leave their protection up to someone else. It is not strengthening the female cause to declare that little girls can’t play with gender specific toys without their fragile minds crumbling to the influence of a patriarchal society. It is not building anyone up to insist that any woman who disagrees with your political viewpoint is the victim of male mind control. Perhaps, instead of tearing each other down for our self-defense classes, Cinderella obsessions, or voter registration cards, we should work on building each other up… you know, empowering.

… the musings of a thirty-something, married, Southern teen librarian with a wildly inappropriate sense of humor, an inability to gauge most emotional cues, and a stubborn, mouthy, redheaded country boy to accompany her through life.

The Best of Belle