Y’all, I’m ashamed to say that, after years of struggle, I’ve managed to take the small things for granted. I still smile when I’m able to buy the name brand Spaghetti O’s, when I only have to work 40 hours a week, when I get to spend an evening reading next to my husband, instead of rushing to an awkward first date. Yet, somehow, I’ve taken one of life’s many blessings as a given. Y’all, for 31 years, I have been living under the assumption that my girl parts were not up for public discussion… and I was mistaken.

Now, don’t get me wrong. There is, of course, a clear distinction between “public” and “family.” The ink had barely dried on my divorce papers, before my brother informed 23-year-old Belle that all the good ones were taken, so if she wanted to get married and have kids, she’d better get on it. The entirety of my twenties, in fact, were peppered with not-so-subtle suggestions that I procreate, even before Jake and I were engaged. Just last Christmas, my Aunt Dee sat down next to me, as I was holding my baby niece, and demanded “What about you? What’s your timeline? When are you having babies?” in lieu of silly pleasantries like “Hello” or “Merry Christmas.” Belle’s Girl Parts have been a favorite family discussion topic for years. Truth be told, save for my dad, the lot of them have had a stopwatch on my uterus for the better part of the last decade.

As for Jake’s family, who are far more old school than mine, I’ve actually been pleasantly surprised that they’ve only just begun to hint that we should get on the baby train, after two years of marriage. Though they don’t quite have the gall of my family, the comments are getting increasingly less subtle, and honestly… that’s okay. While it bothered me to hear these things from my own family, when I was working on my career and figuring out what I wanted from life, I never held any true ire or resentment. As blunt and nosy and opinionated as both sides can be, it’s forgivable… because they’re family. A foundation of nearly every familial portrayal in media is that they suck at boundaries, because they love you… and I can handle that. What I cannot handle, however, is the same lack of boundaries from the cashier at Dollar Tree.

Folks, I’ve worked retail, and still very much work in customer service, so I try to be courteous. When I get to the register, I put my phone down, greet the cashier, engage in any small talk, say thank you and just generally try not to act like an entitled ass. Usually, I receive the same respectful treatment, from someone who will likely never see me again, but still makes an effort to create a pleasant interaction by smiling, making chit chat and ignoring my purchases. So, last week, when I stopped in to grab a card for a coworker’s last day, I thought nothing of it when I piled a few ovulation tests on the conveyor belt, cuz why not? They’re a dollar and I’ve long since passed the time in my life where I’m embarrassed to buy tampons or condoms. Just as I couldn’t care less when a customer asks me for books on demonology and antique dolls (or I at least keep quiet about it), I know cashiers aren’t interested in my budget fertility experiments… or are they?!?!

Cashier # 2: “Oh, that’s exciting!”
Cashier # 1: “Yeah, I had to use over-the-counter options before this, because I couldn’t use anything else.”
Me: “Yeah, that happens sometimes, I know everything else made me sick.” ::Are we really talking about your condom usage?::

… and then I thanked her, wished her a good day and left with my bag o’ pee sticks. That’s right, y’all. It is so ingrained in me to be a good customer, that I thanked the cashier who asked me “How ’bout that vagina?” My When my Aunt Dee asked about my timeline, I had the presence of mind to clap back that Jake keeps putting it in the wrong hole (Merry Christmas!), but a woman I’ve never met blasts my sex life over the loud speaker of a local discount store and I wish her a good day.

When did this happen?!?! When did my fertility become something that not only my family asks about in a pesky, yet somewhat endearing way, but strangers think makes for appropriate small talk?!? I’m all for lifting the taboo on pregnancy, liberating “expecting” 50s housewives from their mumus, and encouraging breastfeeding moms to make themselves comfortable in public, but there is a difference between oppressive taboos and basic privacy! For instance:

Telling a woman she should hide her pregnancy shames her for something she should be celebrating.

While humiliating a woman for feeding her baby in a public courthouse makes a healthy and natural activity taboo, asking a woman if she’s planning to breastfeed is prying into a private personal decision.

Congratulating someone on their pregnancy announcement shares in the joy of a growing family, but asking her about her girl parts is invasive and uncomfortable and I shouldn’t have to tell anyone that!

Naturally, I went home and shared this story with Jake.
Me: “Next month, you get to buy the ovulation tests.”
Jake: “If it happens again, just tell them you’re breeding your dog.”

I’ve been pretty hesitant to revisit this Dollar Tree, though, even with it being so close to work. While a part of me wants to perform some kind of expansive social experiment and buy increasingly awkward items from various cashiers, another part shudders to think what will happen when I actually do get pregnant.

Update: Two weeks later, when Jake stopped by Dollar Tree to pick up more ovulation tests, the same cashier not only commented “Someone’s tryyyying,” but asked if I was his wife. I called her manager and explained that while I know she’s trying to be friendly, someone has got to explain to this woman that things people pee on aren’t up for discussion at checkout.

On Labor Day of 2012, Gail and I had breakfast and went mattress shopping. That, however, was not enough to make us look like lovers, so we stopped into our local sex store (or “novelty store” as the Midwest insists it be called), just for fun. Now, I don’t say “just for fun”, because I’m blushing. I say it, because the one we went to is super trashy, even for what it is. We both much prefer the other one nearby if we’re actually buying anything. This one was strictly giggle-worthy.

Fortunately, we were able to make our jokes and comments without worrying about offending other patrons, as the store was deserted. We laughed over the poorly airbrushed photos: “Where is the rest of her leg?!?!” We recounted the time Gail declared that you’d have to be hit pretty hard with a paddle to brand the word “BITCH” into your skin… just before slapping her arm with it to prove her point and realizing that she was, indeed, getting a “BITCH”-shaped welt. We make these trips a few times a year and this was a pretty standard one. Until…

Me: “‘… and then he touched me down there.’ Seriously. That would make for a great children’s audio book. Read by children for children.”
Gail: grimacing and laughing “Ugh.”
Shopwench: “He didn’t call it that.”
Me: “What?” I was confused since neither of us was talking to her.
Shopwench: “He never called it ‘down there.'”
Me and Gail: in unison “Uh… yeah he did.”
Me: “Like all the time.”
Shopwench: “No. He didn’t. He called it her ‘sex’, but he never called it ‘down there.’ I’ve read all three books.” She said proudly.
Me: “Um… yeah. So have I. He calls it that several times. I know, because we make fun of it all the time.” What can I say? I felt like taunting her.
Shopwench: “Well, no, he doesn’t, but that book has been amazing. That book has saved so many marriages. I’ve had women come in here in tears, because that book has done so much for them.”
Me: “Um… okay. I read it. I liked it well enough to get through it. I preferred Bared to You…”
Shopwench: cuts me off  “Yeah. I’ve read it. Fifty Shades was better. I could’ve done without the three kids and shit, but it was a great book.”
Me: waving a white flag “Um… yeah. I didn’t really care for the two kids at the end. I thought that was unnecessary.”
Shopwench: “No. That book has done so much good. You have no idea.” Yeah… I was just agreeing with your last statement.

Most importantly, “saved so many marriages”?!?!?! HOW? I mean, sure, it’s nice that these women are realizing it’s okay to be strung up like a super sexy deer, if that’s what gets them going; but if your marriage is truly in jeopardy, it’s not because of a lackluster sex life.

If you’re not impressed by my image search results, you’re wrong.

Marriage takes trust, committment and not stealing hundred dollar bills out of my wallet. Cough: I have issues: Cough. Some satin scarves on the bedpost might spice things up, but they haven’t saved shit. Furthermore, you’ve had women come in “in tears” over Fifty Shades of Grey? Were they sporting black eyes? Did you call the police?!?!?! Gail went to the YWCA charity ball supporting battered women and told me that every story of abuse she heard, from men letting the air out of a woman’s tires so she couldn’t leave, to monitoring their cell phones, reminded her of “that awful book you made me read.” So, while most women are adults and can put that alpha male shit into perspective and realize it’s only sexy in a fantasy, if one were bawling and mumbling about Fifty Shades, I’d be inclined to suggest a nice shelter. 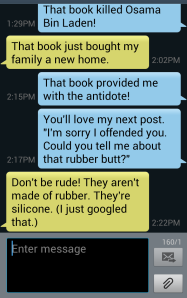 … the musings of a thirty-something, married, Southern teen librarian with an awkward spirit, a stubborn, mouthy, redheaded country boy, and twin girls to accompany her through life.